Posted By Patton & Pittman
The following article appeared in the April 24, 2013 edition of the Leaf-Chronicle, in Clarksville, Tennessee. Chris Clark is a partner at Patton & Pittman. His practice focuses on significant criminal matters.

CLARKSVILLE, TENN. -A Montgomery County jury deliberated for several hours Wednesday before returning a not guilty verdict against a man accused of stabbing another man to death in October 2011. Francisco Aguilar-Valencia, 38, charged with second-degree murder, was accused of stabbing 39-year-old Daniel Dion Bridges to death on Oct. 17, 2011. Clarksville Police found Aguilar’s body laying on Martin Street. A trail of blood splatter led to Aguilar’s home.

Aguilar began a jury trial Monday in Judge John H. Gasaway’s court. During the trial, testimony was presented that, during a get-together at Aguilar’s home, the two men had a disagreement, and at some point, Bridges threatened Aguilar, telling him if he came down the steps he would assault him. Aguilar went down the steps, and the two men began to fight. Bridges was stabbed seven times. When questioned 20-24 hours later by Detective Tim Anderson, Aguilar said he had been involved in a fight with Bridges and did have possession of a knife, but he didn’t remember stabbing Bridges. Aguilar testified in his own defense, claiming he asked Bridges to leave his home. When Bridges left, Aguilar went outside to secure his home and said he was attacked outside. Although he didn’t remember the stabbing, he acted in self-defense when Bridges attacked him, he said.

The jury acquitted Aguilar of murder after deliberating for approximately six hours. Aguilar, who was in the country illegally, will stay in the jail until he is deported by Immigration Customs Enforcement. The jury met with Detective Tim Anderson to speak with him about the case before leaving the courthouse.

John Finklea, assistant district attorney, said if what Aguilar said was true, that he didn’t remember anything about the stabbing and fight after Bridges allegedly hit him in the head, then Aguilar would have had no reason to flee from the crime scene and not call police. He said Aguilar’s story about what happened didn’t make sense. Aguilar testified Tuesday that Bridges ran from the intersection of Crossland and Martin Street to his home and hit him. He said he was hit very hard and had a head injury, not remembering exactly what happened. Finklea noted Bridges was not armed, Aguilar knew he wasn’t armed because he picked Bridge’s knife up from the floor of his home and many of the seven wounds to Bridges chest were deeper than the knife was implying force was used. “You have two people. It was a simple fight. You may have hurt feelings or a bruise but everyone goes home. (Mr. Bridges) should not have ended up in the street, but he did because (Mr. Aguilar) took a knife to a fist fight. … It was a very quick fight, (and Mr. Bridges took) the knife out and used it over and over and over again.” Finklea asked the jury to use their common sense and find Aguilar guilty of the second degree murder of Daniel Bridges.

Chris Clark, defense attorney, said on Oct. 17, 2011, Aguilar had to do something no one would ever want to do and that’s defend himself. Clark characterized Bridges as being ‘macho’ and aggressive. He said it was not a mutual fight but Aguilar was attacked and had the right to use force against Bridges’ who he said had previously threatened to shoot his house up and was known for violence. “All the evidence was that Mr. Aguilar did everything in his power to avoid a fight,” Clark said. He asked for a not guilty verdict and said all elements of self-defense had been proven. 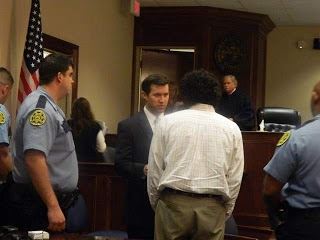